Salmon Fishing in The Rajamaa

By chance we came across an ad for salmon fishing some months ago. Apparently, the biggest salmons in Europe can be found in the Muonio river, about as far away from pretty much everything as you can get.
The ad was from the company Rajamaa, located in Muodoslompolo, just by the river, offering full board and guided fishing trips, basically around the clock since the sun never sets in summer.
We immediately decided to go there.
After an uneventful flight to Kiruna, we were met at the airport for quite a long transfer to Muodoslompolo, neighbour town to Muonio on the Finish side of the border.

About halfway there we came across a reindeer herd that absolutely refused to leave the road. After 2-3 miles they suddenly decided to take another route at the most peculiar place. 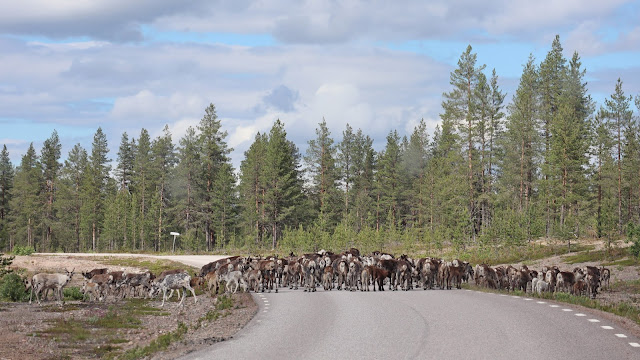 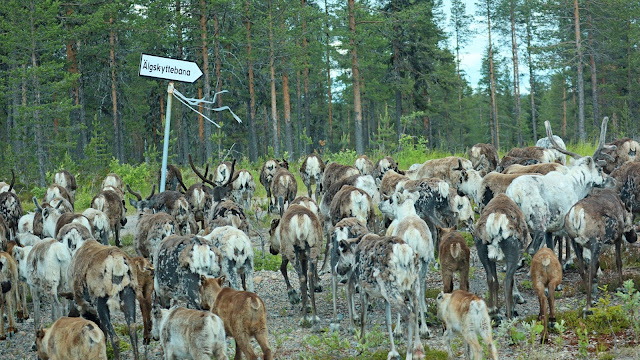 A good few hours later we finally arrived at Rajamaa. Later on I learned that Rajamaa actually means borderland, which is very suiting indeed since the entire facility is situated on an island in the border river between Sweden and Finland. 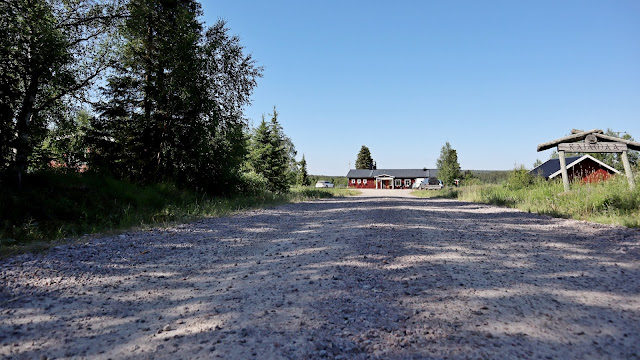 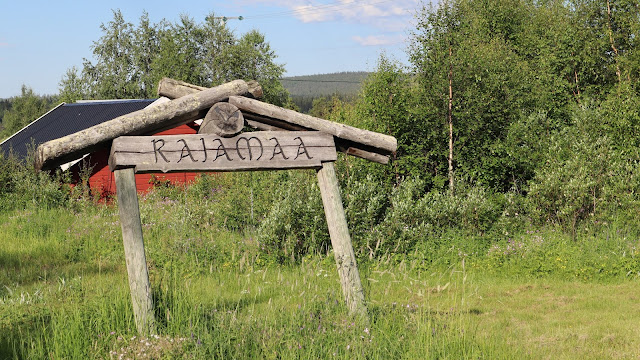 We made ourselves at home in No 6, one of the two-bed cabins. There are a number of 4-bed cabins as well, and even the opportunity to put up your tent, but I am not sure that I would recommend that during the worst part of the mosquito-season, which we seemed to have hit spot on. 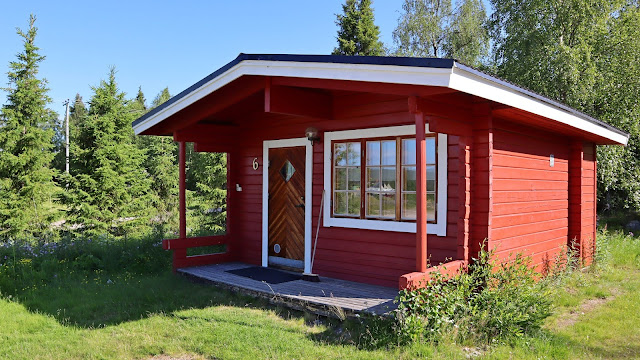 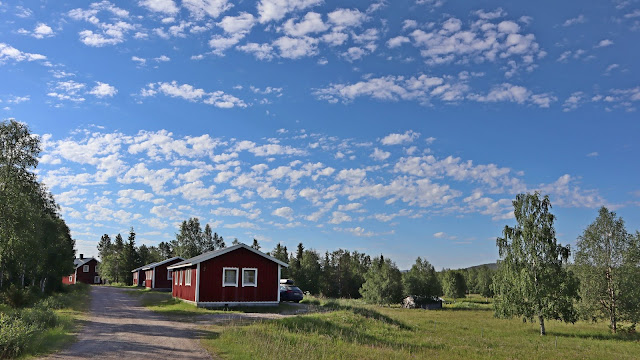 Then we went on to  meet our guide for the week, Keijo. It turned out that we actually had two guides since his son Jere would accompany him for the better part of the week.
We set off through the forest for Pitkänsaarenpää, a promontory not too far away with opportunities to catch both salmon and arctic grayling. And perch and pike I suppose. 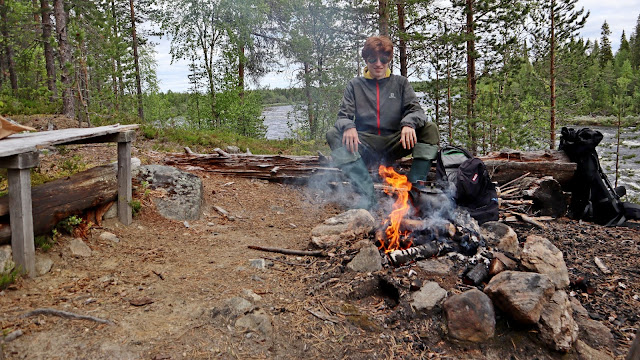 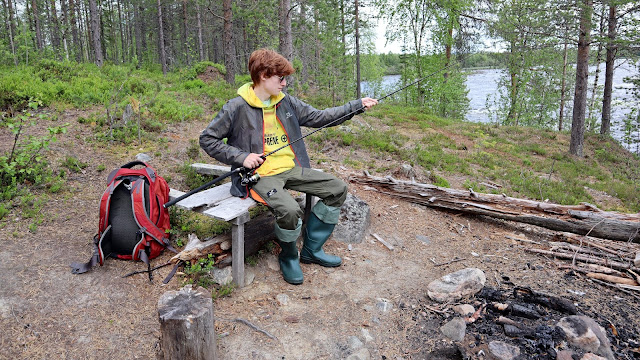 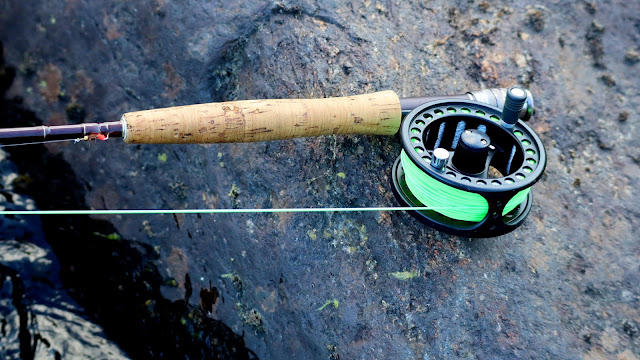 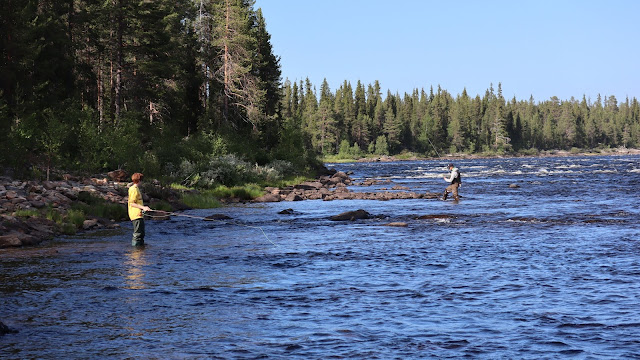 Some kind of adventure company passed by on one of their rafting excursions. 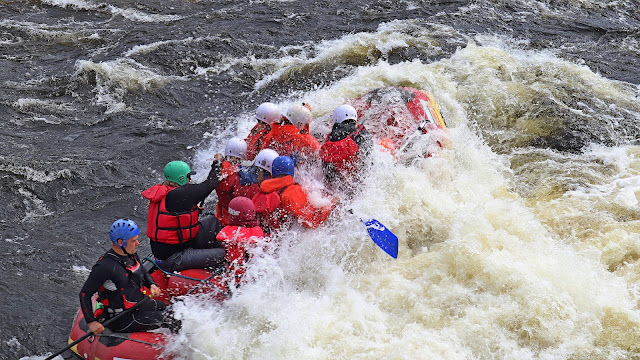 We didn't catch any fish of significance today so I skip forward in time to one of two boating trips we did with Markku Rauhala and his associate Kalle. They really knew their game. With four fishing rods each, in old-fashioned Kätkesuando-boats, we methodically fished the river just above the rapid water, waiting for the odd salmon to rise. And lo and behold, before the night was over, the proud fisherman Todd Linder landed a 5.5 kg salmon. 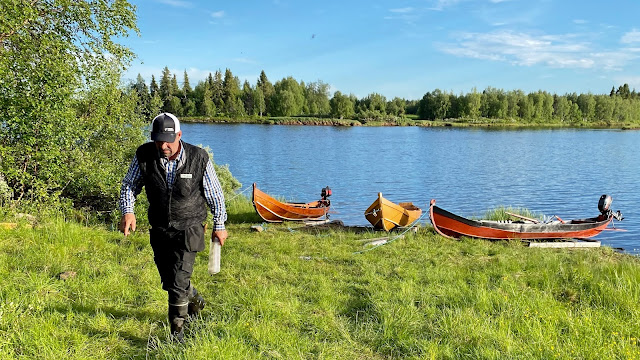 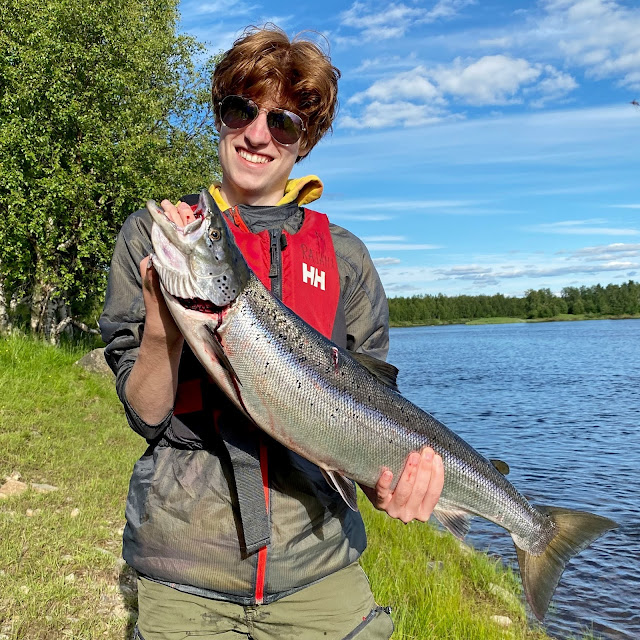 It ended up as a delicious dinner for all the Rajamaa guests the next day. 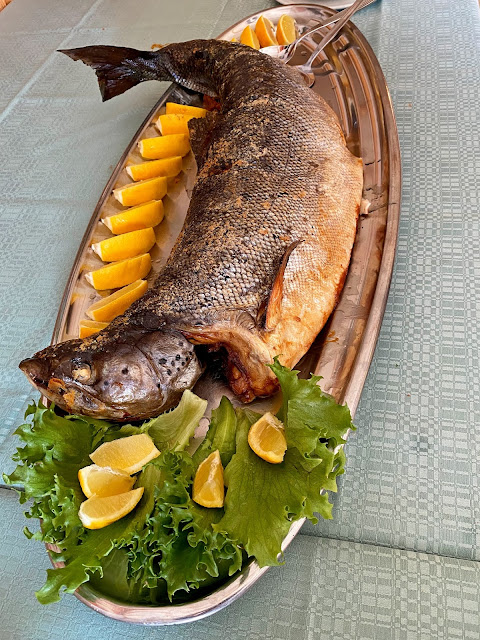 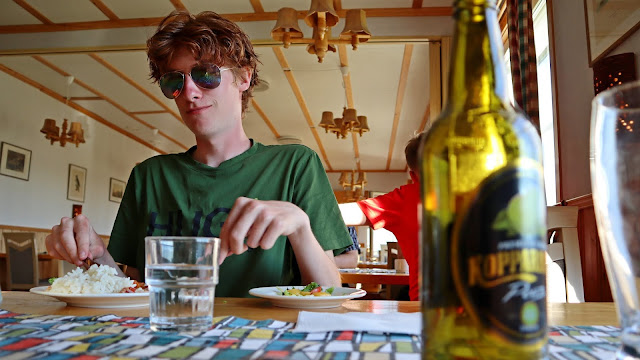 Quite the eco-friendly and sustainable company, they even grow their own vegetables in a makeshift greenhouse. 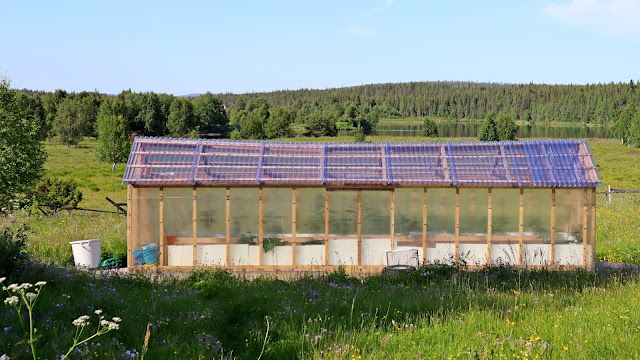 The next boating trip a few days later was even more successful. I got my first one, and Todd got a whooping 7.5 kg beast. 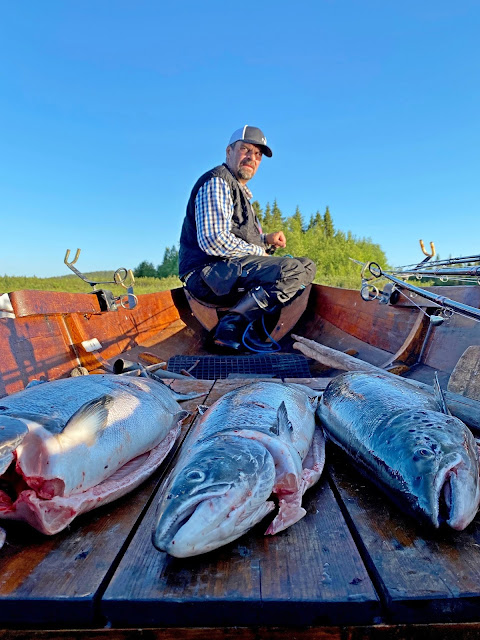 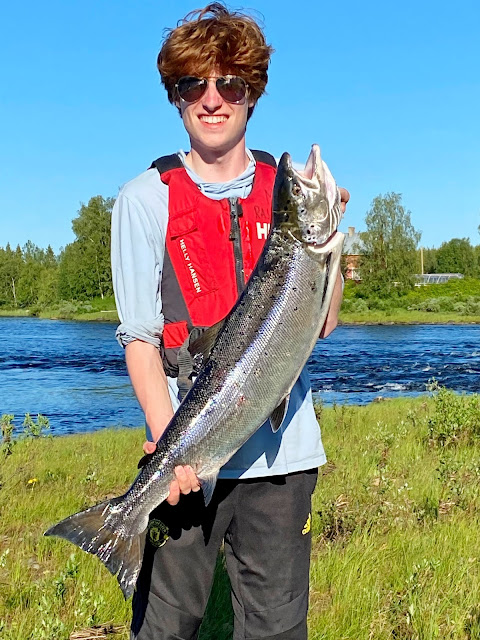 We made some more attemtps to catch salmons from the shores, but it turned out to be harder than we had anticipated. We got some pikes and the odd grayling and perch, but no salmons. 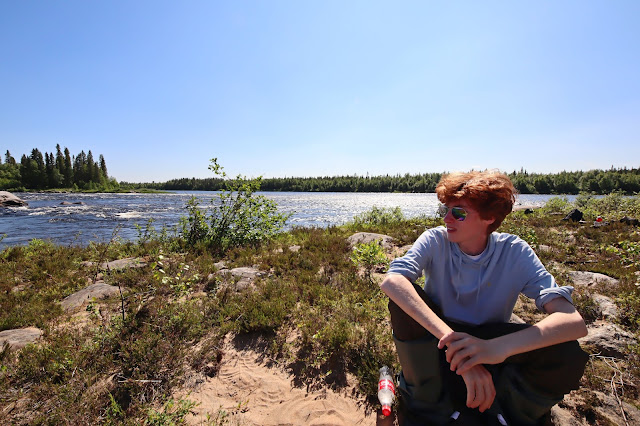 Slowly we began to understand that it is extremely difficult to catch salmons. As both our own guide Keijo, and another local fishing guide said - you would be happy to catch one salmon in a week. If you are extremely skilled, you could hope for two. Since we already had got four between the two of us, and we certainly weren't extremely skilled at salmon fishing yet, I guess that we had filled our quota.
But you've got to keep trying.
Our last night at Rajamaa, Keijo took us to one of our favourite spots. 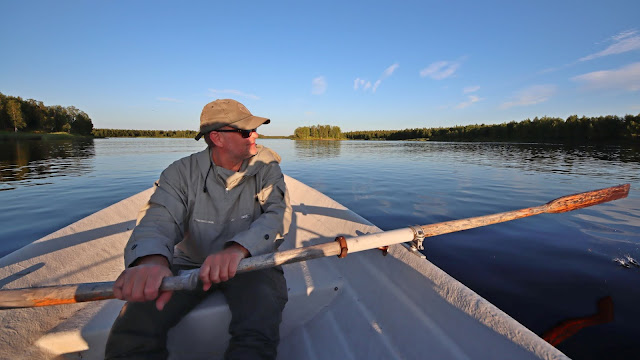 He was off on another project, but we had approximately two hours of fishing ahead of us, and we started working the stream. 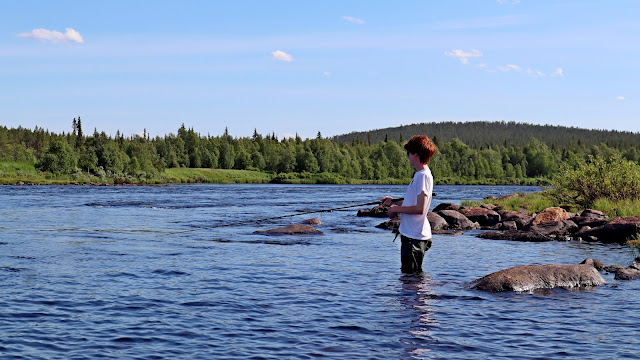 After about an hour, I got a fish on that set off down the river. I followed it on the shore as far as I could, but without a landing net, it would be no easy task to land it. In the end Todd got into the river and managed to wrestle it ashore for our fifth salmon in just four days. 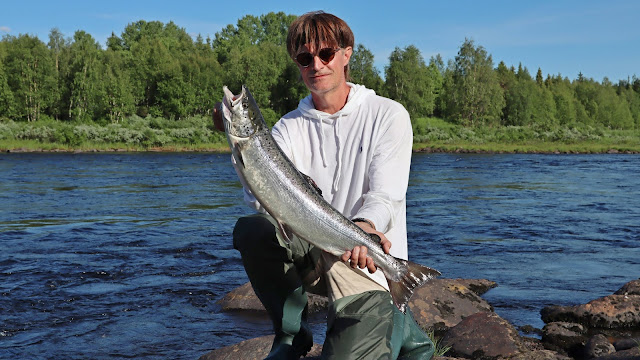 We had a great time in the borderland, and we learned a lot both about fishing and about the interesting history and culture in the northeasternmost part of Sweden.
A big thank you to the entire Rajamaa crew for a unique wilderness and fishing experience.
FISKE I TORNEDALEN
Upplagd av Jorgen kl. 20:07